Mary Edith Wilroy  served as Blair House Manager for the entire term of the Nixon Administration:  Inauguration Day was bitterly cold.  The usual arrangement had been made on the street so that guests and visitors could see the inaugural parade.  There were loudspeakers set up in front of the house, and tight security arrangements had been made.  Anti-war demonstrators had contributed to the feeling of tension that hung in the air.  We would be serving as a way station for the diplomatic corps, providing coffee and refreshments and opening the Blair House Guest Rooms.  The diplomats began arriving in shivering groups around 2:00pm.  They came and went all day long and, to be truthful, many of them stayed in the warm house and watched the marchers through our windows.  The Jamaican and Chilean ambassadors and their wives seemed nearly frozen when they arrived.  They simply took off their coats and stayed.


On the Agnews:  Early in December Mrs. Spiro Agnew held her first press conference a Blair House.  Seventy-five newspaper, magazine, and television reporters were invited to meet informally with the wife of the Vice-President.  They were given a tour of the house and a chance to meet informally with Mrs. Agnew.  Mrs. Agnew was dressed in a "smooth black wool dress with a gay scarf at the neckline."  The women had just finished their coffee when the butler responded to the front door.  There stood the Vice-President.  He had walked across the street from his office in the Executive Office Building, probably anxious to see how Mrs. Agnew was doing at her first meeting with the press.  Mr. Agnew seemed quite at home among all those ladies.  He stayed for about fifteen minutes, during which time he was asked what he thought of this group of press people.  He had already created quite a bit of controversy by outspoken criticism of the media.  These are "my favorite kind of press people," he was quoted saying.  "They are prettier, nicer, more objective  ... what else can I say?"  The highlight of the Vice President's visit, however, was not what he said but what he did.  He was persuaded to sit down at the piano and render the Agnew version of "Sophisticated Lady."  Then, amid applause, his little impromptu visit." 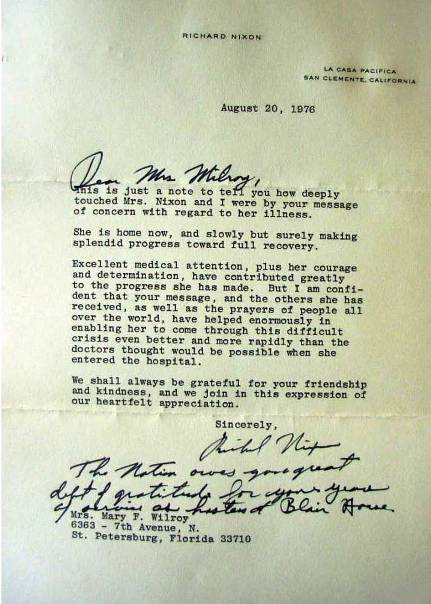 On President Nixon:  On the first anniversary of his inauguration President Nixon was given a party by Secretary of State and Mrs. William P. Rogers.  The entire Cabinet and their wives were invited.  I checked with Lucy Winchester, Mrs. Nixon's social secretary, at the White House about the menu and made sure that I'd have the best parlor maids and my pick of the butlers for this very special party.  The menu featured Mr. Nixon's favorites:  quail and white grapes and Maderia sauce, wild rice and truffles, baked egg-plant Provencal, green peas with water chestnuts, and a watercress and avocado salad served with pate.  For desert we served one of Dallas' rich chocolate deserts.  The mood of the party was relaxed and happy, a group of friends celebrating together, but the plans had been elaborate.   The forty guests came early so they could rehearse their big number, Whittier College song.  Bruce Harlow, President Nixon's counsel and one of the wittiest men in Washington, was the master of ceremonies.  And the high point of the evening was a film specially made for the evening.  It was a little hard to describe.  Imagine, if you will, a foot-ball game with ballet as a music background and a ballet teacher's commentary as the spoken sound track.  Anyhow, everyone found it hilarious.  The football theme continued in a picture given to the President at the dinner.  This was a photograph of a football team with the faces of Cabinet members substituted for the real players; the photo was labeled "The President's First Team."


The papers are currently housed at the Loyola University Honors Program and are subjects of academic study under the direction of  its Director,   Naomi Yavneh, Ph.D.