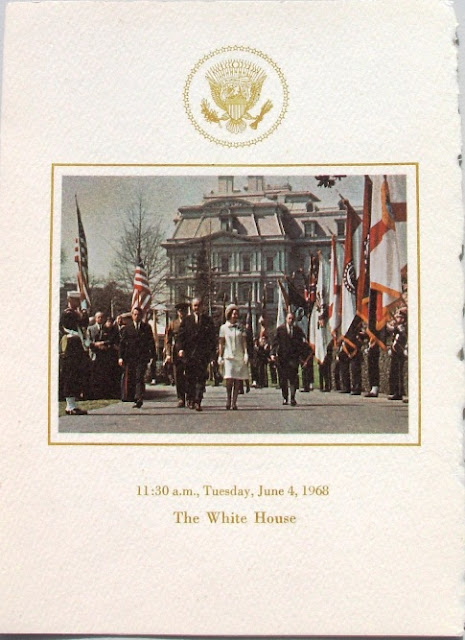 
Mary Edith Wilroy  served as Blair House Manager for the entire term of the Johnson Administration.

On President Truman:   In April, at the invitation of President Johnson, former President Truman was at the Blair House overnight.  He had come for the annual Gridiron Club Dinner given by the Washington Press corps.  In addition to good food, the dinner always features a song and dance performance that gently and not so gently ribs Washington's famous people.  Mr. Truman arrived on Saturday  Our regular butlers were not available, so I hired a butler with the usual security clearance.  He couldn't have been a security risk since the poor fellow turned out to be almost totally deaf.  Luckily I discovered quickly that he couldn't even hear the front door bell.  During the entire visit the parlor maid or i had to be nearby, ready to open the door for any callers.  Mr. Truman followed his usual routine, rising early on Sunday morning for one of his famous morning walks.  He was a accompanied by a small group from the press and was hailed by passerby who were thrilled to see the former President striding by in the manner that had become familiar to everyone all over the country.  When he was recognized by people who called, "Hello Mr. President," or "How are you, Harry?"  he would stop and shake hands and chat with them for a few minutes.    Then he came back, had a leisurely breakfast, and left almost immediately for the trip back to Independence.  Since it was a Sunday the front gate was locked as soon as he left, and a small staff was tidying things up inside when all of a sudden the side door bell rang.  Because I was in my office I was closest to the door.  I went to see who it could possibly be at that time of day on Sunday.  I opened the door and there stood  President Truman.  He had come back to use the bathroom.  I showed him the the elevator and Rigoberto accompanied him upstairs to the room he had vacated only about a half hour before.  When he came back down, President Truman apologized and said he was sorry to have been "such a nuisance."  I, in turn,  apologized for the locked front gate.  Graciously he said he didn't mind using the side door at all/  It saved him from walking up the front steps.  But we never again locked the front gate after a departing visitor until we were sure they arrived at the airport. 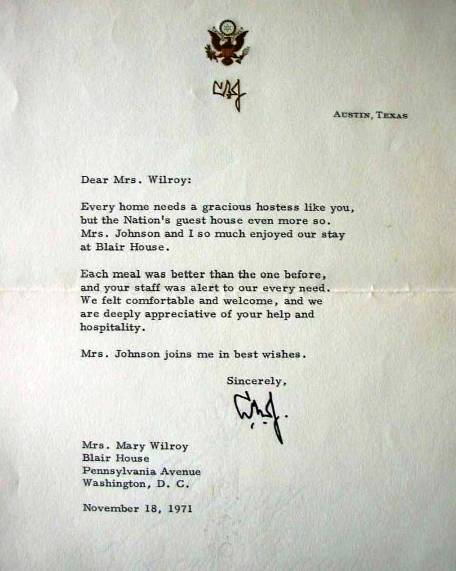 Former President Lyndon B. Johnson
writes Mary Edith on his stay at the Blair House

On President Johnson:  In February 1964 I was invited to a diplomatic reception.  I received hundreds of invitations every year to all sorts of events, and although I was always pleased to have been included I just couldn't go to all of them.  I did try to accept White House invitations whenever possible, however, and on this occasion I got to dance with Washington's most sought after dancing partners, the President.  The next day the newspapers were calling to ask how I felt about dancing with the President, he was a good dancer, and other weighty questions of that sort.  I couldn't really tell them if he was a good dancer or not.  The idea of dancing with the President had me dancing on air, I just followed his lead, and before I knew it, the music had ended and I was back at the side talking to Robin.  It was really a great treat for me and something I still tell my grandchildren about. 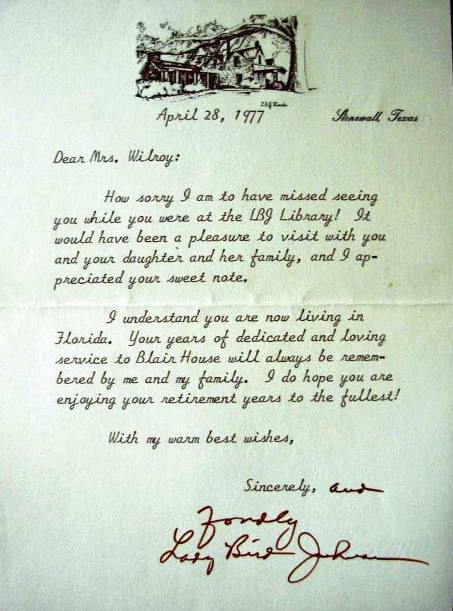 Lady Bird Johnson:  Mrs. Johnson, now the first lady, came for lunch with Robin and several other members of the Fine Arts Committee for a formal tour of the house so that she could see the progress that had been made.  Although she was an enthusiastic honorary charman of the Fine Arts Committee, she now had so many duties as First Lady that she was unable to do much of the actual work on the committee.  She will probably always be better known for what she did to help make America's landscape  more beautiful.  She encouraged people all over the country to plant flowers and clean up neighborhoods.  To set an example for such projects elsewhere, she was responsible for many of the lovely plantings of spring flowers that bloom in Washington Parks. 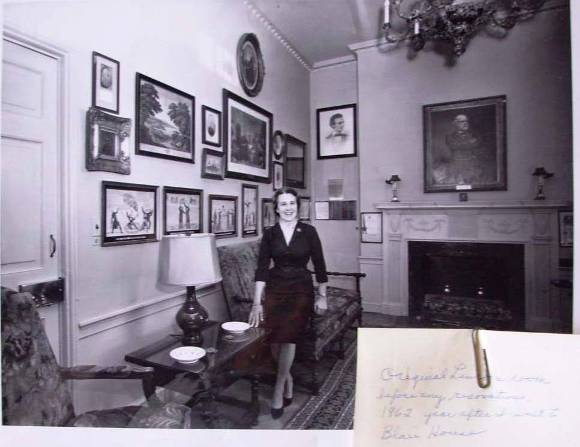 Mary Edith Wilroy and her note at the Blair House - 1964

The papers are currently housed at the Loyola University Honors Program and are subjects of academic study under the direction of  its Director,   Naomi Yavneh, Ph.D.