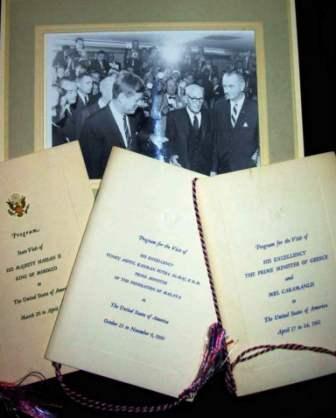 The New President: “It did seem that everyone was flying over to see President Kennedy.  You could almost imagine the Presidents and the Prime Ministers lined up at airports all over the world waiting to get on the next plane to Washington.  During the short administration of President Kennedy, forty-seven foreign guests came to see him.” 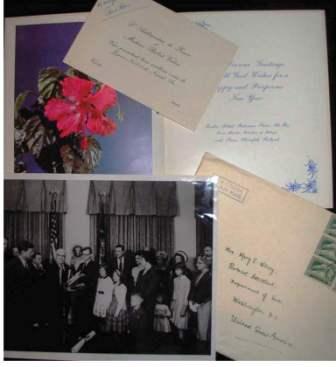 On Her First Head of State: “As I watched, a large black limousine, flags flying from both front fenders pulled up to the curb and President John F. Kennedy, and President Habib Bourguiba of Tunisia emerged.  Just behind the two men came the First Lady, Jacqueline Kennedy, and Mrs. Bourguiba  … I admit that I was just a little nervous.  But then, as their presidential party reached the door reached the door I realized that this was the young President’s first visit from a head of state as well as mine.  It hit me that the Kennedy’s might be just as apprehensive as I was, and that calmed me down.” 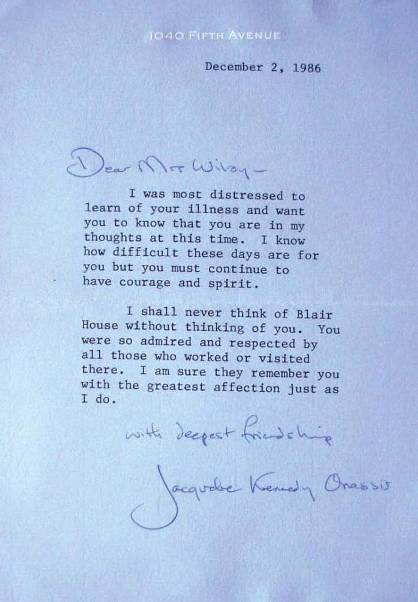 On First Lady Jacqueline Kennedy surprise visit:  “Mrs. Kennedy wanted to me to tell you that she’d like to come over to see Blair House in a little while, with a few people” the secret service said. ‘Mrs. Kennedy doesn’t want to see the whole house does she?’ I prayed.  ‘I am pretty sure she does.  We’ll see you in a few minutes.’ … We began to walk through the house, room by room, and Mrs. Kennedy immediately showed that she was very knowledgeable and very interesting in the furnishings.   … It took two hours for Mrs. Kennedy to see the whole house. ‘I envy you all these lovely pieces of furniture,’ she said as she was leaving.  ‘I’m sure we’ll soon be able to do some redecorating here and show them off in an even better setting.’ She promised.  Then she thanked all of us and was gone.  Her suggestions had been excellent and set me to thinking about rearranging several of the rooms.  And she had sparked one idea I decided to act on right away.” 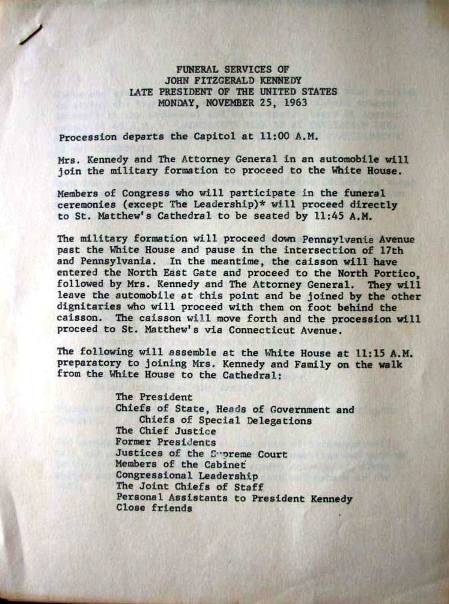 On The John F. Kennedy Assassination:  In the process of an extension renovation of the Blair House on November 22, 1963 the phone rang.  “My younger daughter calling me from St. Francis College in Pennsylvania. ‘I can’t believe Mom’ I could tell she was crying. ‘I can’t believe the President was dead.’  I had no idea what she was talking about.  We had been too busy to hook up any television sets and we hadn’t thought of turning on the radio.  ... I immediately called the department and the news was confirmed.  Someone got a radio and plugged it in, and in a while someone hooked up one of our portable television sets.  So like everyone else in the country, we sat stunned while the terrible events were replayed in front of our eyes.  I was numb.  But it suddenly dawned on me. ‘They’re going to need this house,’ I said to Ingrid.  ... Several times in the late afternoon I spoke to Robin.  ‘If you need the house,’ I told her ‘it will be ready for you.’  That evening when I got home she called me ... ‘Several of the Kennedy’s close friends would like to come over tomorrow at about eleven thirty before going to the White House.  You’re sure you can accommodate them?’ I assured her that I would be ready.

I had heard from Mr. West at the White House that President Johnson had invited former President Truman and his family to stay at the Blair House during the days of the funeral.  They were coming at about three the next afternoon.  ... By eleven-thirty the little army of people we had assembled had managed to get the first floor completely set up.  There was a table of refreshments, and parlor maids and butlers in their black and white uniforms were on hand to serve. ... ... The Nosegay had prepared several especially beautiful flower arrangements.  The floors were clean, if not sparkling, and the rugs and furniture were in place ... The workman who had accomplished this miracle were now hard at work on the second floor ... they were getting the bedrooms ready for the Truman’s party’s arrival.  At eleven thirty Robin and her guests appeared.  She couldn’t believe her eyes.  After about an hour we all went over to the White House. 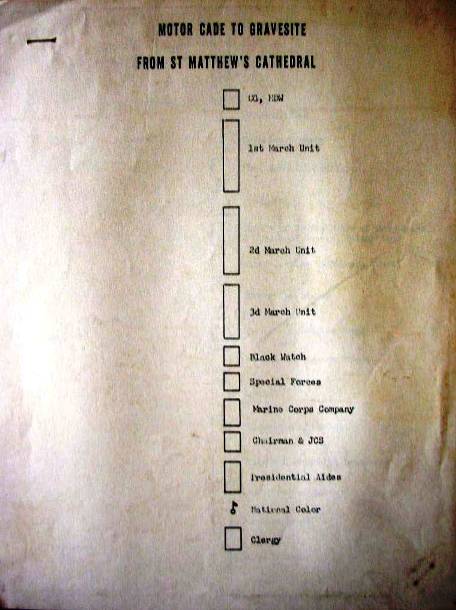 President Kennedy’s flag-draped casket rested on a catafalque covered in black velvet and standing in the center of the room.  Two lighted candles were placed at the head of the closed coffin.  The honor guard stood at rigid attention ate the four corners of the catafalque.  With a large crowd of other visitors I walked past the coffin and said a prayer. Then I had to return to the Blair House, where there was work to be done.  As I walked back across the street I saw literally hundreds of people outside the White House fence and clustered in Lafayette Park.  It was pouring, but they stood there as if somehow just being near the White House would ease their pain and grief. 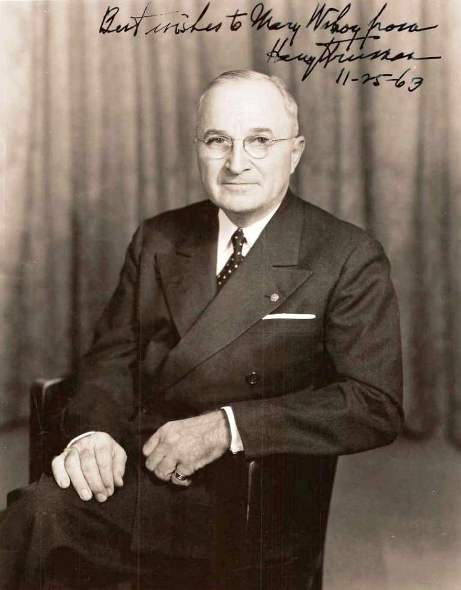 A short time after I returned to the Blair House a car pulled up to the front entrance and President Truman, with his two military aides and his friend Frank Gavin, got out.  The funeral procession passed by the Blair House.  We stood on the steps, tears running down our cheeks.  The sight of Mrs. Kennedy walking firmly, flanked by her husband’s two brothers, her head held high amid all the foreign dignitaries, was heart breaking.  ... I felt enormously proud of her dignity and strength.  I can still hear the mournful wail of the bagpipes that seemed to echo what all of us were feeling.  ... As I stood on those steps I couldn’t help remembering the day ... when I had watched our young, handsome President running up the steps towards me, bareheaded and so much alive, while his young, girlish-looking wife tried to keep up with him.  It was hard to imagine that anything would ever be the same again.

The papers are currently housed at the Loyola University Honors Program and are subjects of academic study under the direction of  its Director,   Naomi Yavneh, Ph.D.